My Kick-Butt Marathon Strategy: Smile, Breathe and Go Slowly (Plus, Why I LOVED Honolulu)

The words of Naht Hanh in the quote above are some of my favorite ever — I use them almost daily to remind myself to stay in the moment.

Hanh’s advice, of course, is advice on life, but if you are a runner like I am and see the marathon (and running in general) as a metaphor for life, then Hanh’s advice applies just as well for the marathon.

And so that’s what I did in the Honolulu Marathon this past weekend (Dec. 14) … I used those five words as my mantra, and DID AWESOME!!!!!

If you recall my previous post, I wrote about how I was going to abandon my time goal of coming in under 4 hours and focus instead on two goals: 1) have fun and 2) finish the race. This was especially true after I arrived in Honolulu to find that the island (Oahu) was being hit by a storm and was flooded in many areas.

Well, I accomplished those two goals (I had a blast!) and I still came in under 4 hours! It was all due to my mantra: Smile, breathe and go slowly.

I came in at 3:54:08 (it’s the “chip time” in the linked page) and ran what is called a “negative split” — my second half was faster than my first half. It was the perfect race for me.

I didn’t have high hopes of coming in under 4 hours, but I thought I’d just see if I could do a 9 minute/mile pace for as long as possible (a 9-min/mile pace is about a 3:56 marathon). The start of the race was super crowded, with lots of slower runners lined up before me, but I wove in between them with a smile on my face and did the first mile at 10 minutes (slow for me but actually it was a good start)

After that, I consistently did 9-minute miles (give or take 10-15 seconds, especially during a bathroom break) for the first half marathon and hit the halfway mark at about 1:59 … and decided to try to go a little faster. From there on out, I ran most of the miles faster than 9 minutes (sometimes under 8:30) and the final mile I did at a near sprint, crossing the finish line with my arms raised in the air in victory!

So here’s how Naht Hanh’s words helped my marathon:

1. Smile. Every time I repeated the mantra, I smiled … and instantly felt better! The simple act of smiling raised my mood every time, and made the run more enjoyable and less difficult. This worked even in the most difficult of times, when I was struggling after 20 miles (those last 6.2 miles are the longest miles ever). I’d smile, and all of a sudden nothing seemed so bad.

2. Breathe. I would literally take a deep breath, and my whole body would relax. Breathing helped me to focus on the moment, rather than thinking about all the miles I’d run or all the miles I still had left to run — I left those thoughts behind when I focused on my breathing, and just thought about the mile I was running now. In fact, I didn’t even think about the whole mile I was running — I thought simply about the steps I was taking and how my body felt and all the sights around me. Focusing on the moment was tremendous, and the marathon was an incredible way for me to practice being present, repeatedly.

3. Go Slowly. This was a reminder for me to not go too fast, especially in the beginning. Of course, later in the race the same pace actually seemed fast, so I didn’t actually “go slowly” toward the end. But going slowly in the beginning really helped. It was also a nice reminder for me to drink in the entire marathon, not just focusing on my running but on everything that was happening. This was my first big marathon (I’ve only run on Guam before) so I was very happy.

This was my third marathon, and I beat my previous marathon in March by 20 minutes, so I was ecstatic with my performance and I loved the crowd and the atmosphere and the course. I had such a great time!

My wife Eva and I spent three days and four nights in Honolulu, and it really wasn’t nearly enough. I couldn’t do any longer because of our kids, the holidays, and my impending book launch, so we did the best we could in three days while still going slowly and relaxing.

We loved the weather in Honolulu, even if it was rainy sometimes. It was warmer than the continental U.S. but cooler than Guam, so pretty much perfect. The people were super friendly, the island is just beautiful, and everything we did was great. For example:

But we didn’t get enough. We didn’t tour the non-city part of Oahu like we’d hoped because we ran out of time and also there was flooding. And we didn’t go to any museums or temples or cultural stuff like we’d hoped. Oh well, there’s only so much you can do in a few days without feeling rushed (our goal on any trip is to take things slowly, smile, and breathe). And this gives us a reason to come back — to see the other stuff we didn’t get a chance to see!

I also had a chance to have lunch with a few Zen Habits readers: Sid Savara, Capsun Poe, Sandee Oshiro and her sister Cindy (who isn’t a blogger but trust me, I tried hard to convince her to at least microblog). It was nice because it was small — I’m better with small groups — and they were all lovely, friendly, interesting and disproportionately attractive people. I had fun! 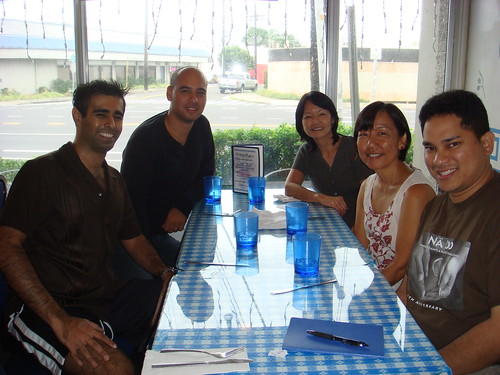